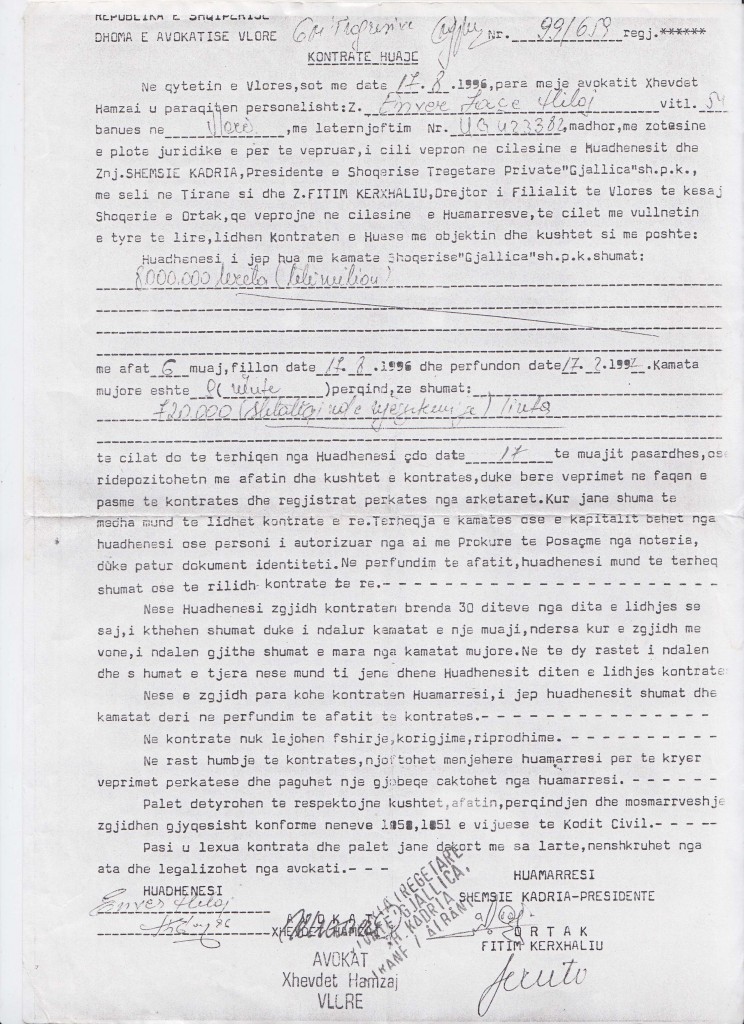 Durim, a former kreditor and sekser (broker) to one of the major kompani, Gjallica, shared with me his kontratë huaje (loan contract) with Gjallica, dated August 17, 1996 (Fig. 1) . Gjallica was registered as a kompani (limited liability company). It was  the second pyramid firm to fold in early 1997 causing catastrophic losses among its investors.

Technically, according to this contract, Durim had “loaned” eight million Italian liras, (roughly US$ 5,500), for a period of six months, during which time the interest would be nine percent. In other words, as stated in the contract, by the end of the six months, the “huadhënësi” (loan-giver), in this case, Durim, would receive the principle in full plus an interest of 720,000 liras (US$ 491), which he could either collect or re-deposit for further interest. The contract is signed by Durim, which acts as “huadhënës” (loan-giver) and the representatives of the co-owners of Gjallica, Shemsie Kadria and Fitim Gërxhalliu, listed as “huamarrës” (loan-takers), in the presence of a certified notary public.

The terms used in the contract take after the terminology and legal definitions of non-bank loans and the legitimate terms of moneylending as defined in the articles 1050 and 1051 of the 1993 Civil Code. These contracts were legitimate in so far as the articles cited did indeed sanction non-bank interest-bearing money-lending although it does not set a limit on the interest nor the number of loans. Former kreditorë (creditors/investors) pointed to these contracts as a legal instrument that legitimized the pyramid firms. While most have lost their hopes of receiving due compensation for their losses, they still continue to hold on to these contracts as proof of their deposits.