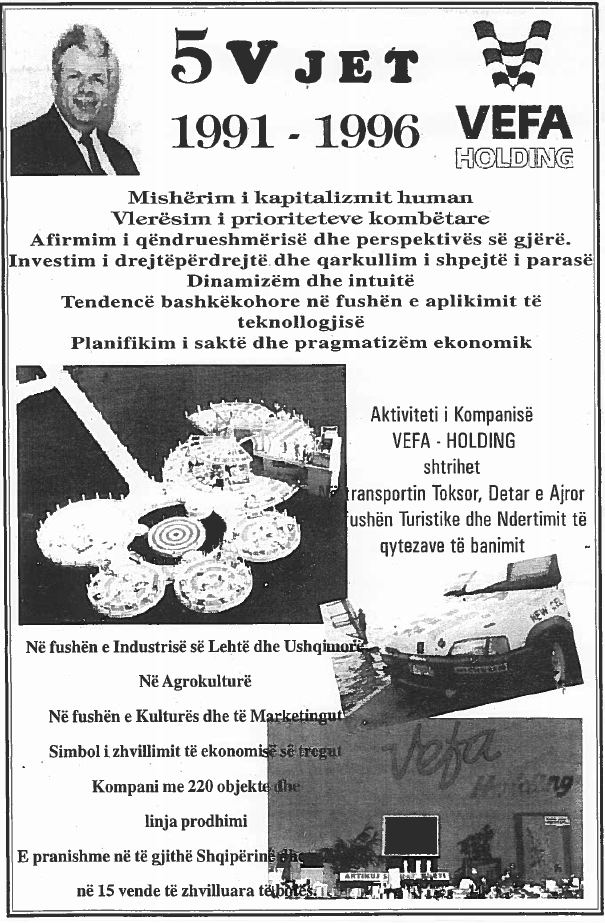 Vefa Holding was on the of the first firms to register as kompani (company). By 1996, the firm completed its 5th year of businesses, thus representing the firms with the longest history (other firms emerged after 1993). In 1996, Vefa celebrated its 5th year anniversary with a public fair and other festivities. In public media and events, Vefa represented itself (and was seen as such by kreditore) as a leading capitalist company engaging in multiple areas of the economy.

and its multiple economic activities:

In chapter 1 of my book I explore this and other ads of the firms. I argue that:
Here Vefa presents itself as a capitalist enterprise, competitive yet also generous and benevolent (“humane capitalism”). Vefa’s activities are cast in line with the national project of free-market reform, highlighting its “direct investments” into the national economy and its contribution towards the development of capital markets (“the rapid circulation of money”), which refers to its fajde activity. Further the ad projects a business ethic that combines a competitive spirit and entrepreneurial instinct (“dynamism and intuition”), rational calculation, and planning (“accurate planning and pragmatic economics”). Finally, it points out connections to global business trends by emphasizing the company’s “contemporary tendency” and the incorporation of “contemporary technology.” Overall, the ad captures a historically specific register of entrepreneurship. The values of the firm represent a capitalist ethic that combines aspects of a Weberian ethic of discipline and calculation (Weber 2004 [1920]), an instinctual financial acumen not unlike that of Wall Street traders and speculators (cf. Ho 2009; Zaloom 2006; Appadurai 2005), and a patriotic economic ethos that resonates with the communist economic ethic. This entrepreneurial ethic extended beyond these firms, encompassing a postsocialist entrepreneurial ethic at large. [Excerpts from Chapter 1: Capitalist Firms of Ponzi Schemes?: Gender Notions of Finance]