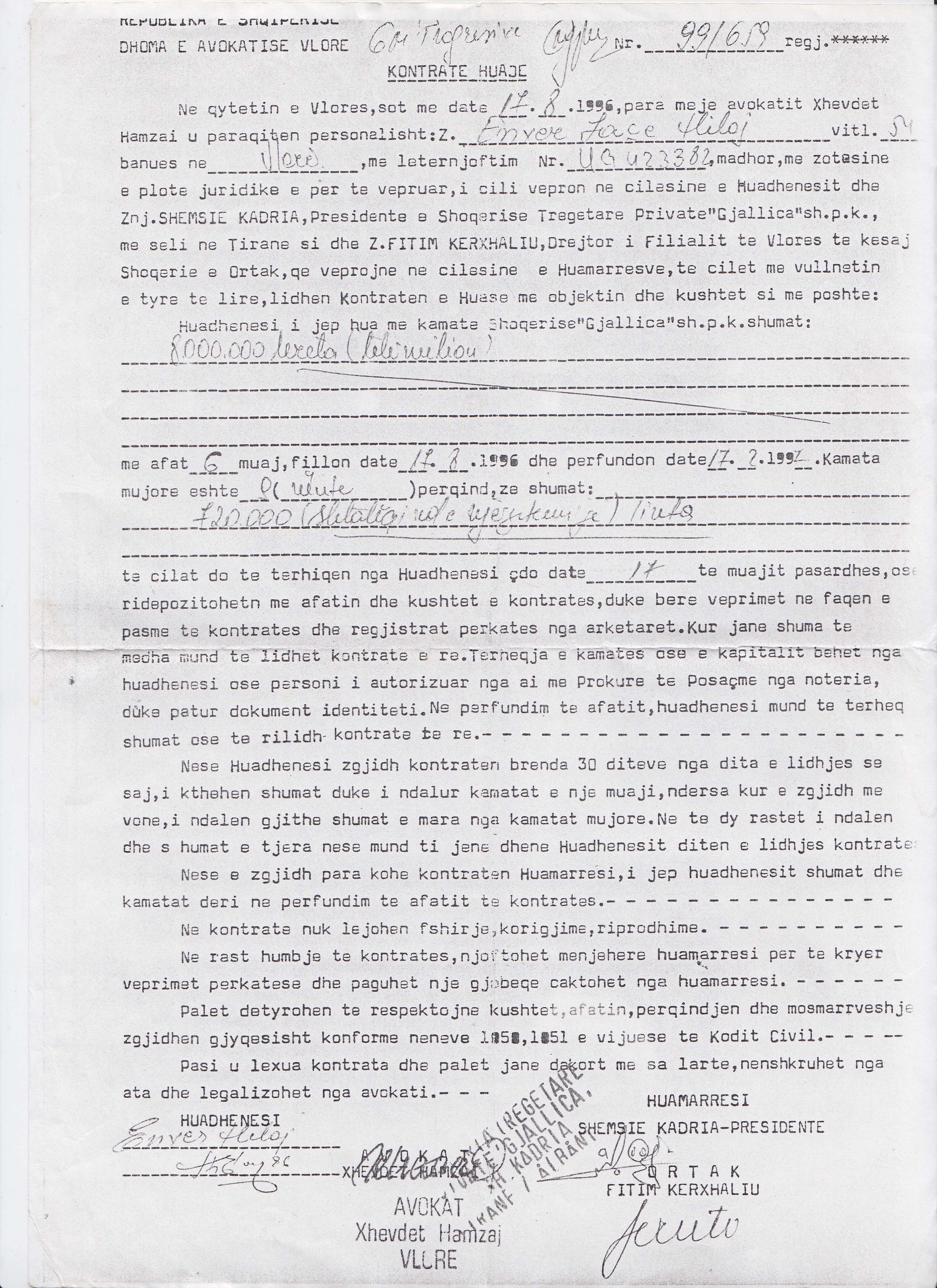 [Pyramid firms] were legitimated by various forms of legal, political, and public discourse.
One such technology of legitimation was the credit contracts (kontrate huaje), issued primarily by the companies (kompani). Kreditorë routinely mentioned credit contracts to prove the legality of the firms and to justify their own decisions to invest in them. The contracts are recognized by public authorities and used as means of claiming compensation. Kreditorë continue to hold on to these contracts as evidence of their deposits with these firms. Some still hope that they would be able to retrieve their lost deposits for future compensations from the state.

Durim, a former kreditor and sekser (broker) to one of the major kompani, Gjallica, shared his credit contract, dated August 17, 1996 (Fig. 1). In the contract, Durim had “loaned” eight million Italian liras, what would roughly today be 5,500 U.S. dollars, for a period of six months, at an interest rate of nine percent. In other words, as stated in the contract, by the end of six months, Durim would receive a total interest return of 720,000 liras (US$ 491), which he could either collect or re-invest in the firms. The contract is signed by Durim, the borrowers (representatives of the kompani Gjallica), and the notary public.

Further, the contract contains an important paragraph that references articles 1050 and 1051 of the Civil Code, which spelled out the terms of unbanked moneylending. In the aftermath of the collapse of the pyramid firms, there have been different opinions on whether this application of Article 1051 was an accurate interpretations of the law. For instance, an economist at Grupi i Transparencës së Firmave Piramidale (the Group for the Transparency for the Pyramid Schemes) claimed that, while the kompani were legally allowed to take up loans, the amount of interest offered within the short periods of time and the scale of “borrowing” from kreditorë was a misapplication of that law. Yet, the law itself allowed for such ambiguities. Article 1051 specifically states: “Unless otherwise agreed upon by the two parties, the debtor must pay the creditor the interest (kamatat). The interest agreed upon must be paid annually, unless otherwise agreed upon by the parties of the contract.” In other words, not only did the article legitimize the exchange of loans outside of the bank, it also left it to the discretion of the signing parties the act of determining the interest rates at which the loans would be set.

In addition to citing the provisions in the Civil Code, kreditorë also recalled how the very act of signing such contracts in the presence of a certified notary public added further legitimacy to fajde. Blerimi, another former kreditor of Gjallica and Kamberi justified his multiple deposits as follows:

For Blerim and many others that echoed a similar sentiment, the legitimacy of fajde was two-fold. First, kompani were legal private entities, they were legally registered as juridical persons. Second, the specific transaction of fajde was legitimate because it was performed in presence of licensed notary publics. While the credit contract thus constituted a market device (see Callon et al. 2007) the act of notarization brought into presence the socio-technical arrangements (see Caliskan and Callon 2009; 2010) that formatted the specific transaction of fajde. As such, these devices and socio-technical arrangements brought legitimacy and legality to fajde and to the firms. [excerpt from Chapter 1: Capitalist Firms of Ponzi Schemes?: Gendered Notions of Finance]